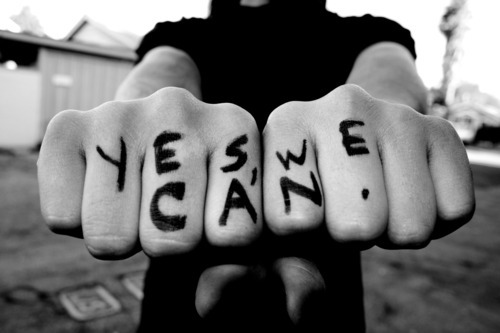 By now, most of us (if not all), have been totally dissipated by the campaigns of the presidential candidates. What’s gone on for only a few months almost seems as if it were a year, accumulating into its finale tomorrow. As for tonight, I feel like writing about what the campaigns of Barack Obama and John McCain have revealed about America, and what I hope for the future.

First off: Barack Obama. The word “Obama” has risen to almost symbolize an entire cultural movement than it does a lone presidential hopeful. I’ve seen things in the past few months that I never imagined I see: graffiti displayed on buildings short and tall, sidewalks, and lamp posts—calls for a rebellion against the current Republican regime. This following is flowing through paths that Barack Obama has carved. Through Obama’s words and eloquence—which hasn’t been the norm for American presidents—a black man has risen up to not only be a leading voice of his race and other minorities, but of the whole culture of the proudly underprivileged street society.

This was evident to me while walking the streets of San Francisco and L.A., gazing upon the messages of the voiceless, the “anti-press conference” everyday people who conceived an image and sprayed it onto the street for all to see. Not to mention the now immortalized Shepard Fairey poster of Obama’s face that has garnished cities and internet sites across the country. Graffiti isn’t the only form of communication and expression for the underprivileged in society. All types of music have been put out in an effort to get citizens, who wouldn’t regularly listen to a rally or debate, to hear Senator Obama’s words. These are just some examples of the effort of the people of this country, the people who these men are attempting to lead, to influence the future of their lives and land.

Before I come across as a total Obama groupie, let me discuss McCain. From my first time seeing him many years ago on the TV set while running for President another time, I’ve immensely respected him. The man’s story should be made into a movie for Christ’s sake. It’s hard to even imagine a soldier going through what he went through while being kept as a POW. In fact, back then, being as young and naïve to politics as I was (and maybe still am), I wanted McCain to win a presidential election almost entirely for that reason. Doesn’t it seem like a natural narrative for a man such as himself? To serve his country, be kept as a hostage and tortured for years, rebound and serve his country again in his state of Arizona even after what he went though… and become president? Perfect!

McCain has risen to the position he is at now because he has enough strength within himself to persevere through things most men can only imagine, and he seems to be one cool cat. Unfortunately, that “coolness” was a version of McCain at a time of his life that has now passed after he won the Republican nomination. I’d be bold enough to say that it was the fault of the entire Republican party and their string pulling, but tomorrow’s election hasn’t come yet. I can’t say the campaign was a failure on their part and if the country feels that McCain is untrustworthy as I think he is. However, McCain’s transformation from a Top Gun-type maverick to a politician who thinks it’s cool to call himself a maverick (like nicknames, you don’t get to choose), has been directly linked to his nomination. Though I’m only speculating, I’d presume that under the nerves of finally being a stone’s throw from the presidency, McCain fell under his own weight and let his advisors do more than advise him, but control him. Gone was the slick McCain, and steps in the awkward, repetitive, fragile McCain.

Enter Sarah Palin. In an attempt to shake things up, McCain playing off his maverick self-given nickname chooses a woman he has only spoken to ONCE before, as his running mate. I see this ploy as an attempt to counter the first “real African-American candidate” appeal surrounding Obama, since Obama in that sense truly does symbolize what both parties are preaching: Change.

For one glorious week, McCain’s strategy worked. The GOP was in cloud nine after announcing Palin, women were united behind her, and the Republicans had their weapon of change in the bag, until the weapon spoke. She was the equivalent of a medical journal written by Dr. Seuss, things began to plummet in the GOP, though the main body of loyalists stayed intact.

Following the weeks of the National Conventions of both parties, Americans themselves, or rather their attitudes, have shared the spotlight with the candidates. In good ol’ “Crips vs. Bloods” fashion, Democrats and Republican followers quickly took their battle stances and put up their guard. Not surprising were these actions, since it’s always an occurrence of the four-year presidential elections. But sadly, this increasingly became more intense than years prior. The epicenter was the south. Racial tensions heated up, and with that, came the Obama laden dolls hanging from trees, racial slurs being yelled during McCain-Palin rally’s, and hate filled propaganda being passed around that mindlessly put Muslims on center stage. This deeply saddened me, not because I thought racism was gone, but when I saw the men and women in videos on CNN and looked into their eyes and seeing a sense of fun in it, I could not believe it. I will never forget an old man holding a Curious George doll with an Obama sticker around its head, waving it to the camera with a smile on his face.

Racism is not dead. It is far from it. It affects almost everyone, everywhere. But no where have I seen it more evident than what was shown in the South during the past month. Do I think these people have become prey to their own ignorance? Yes. Do I believe people will still think Obama is a terrorist with ties to Al-Qaeda four years from now? There will be some. There will always be some of every intolerant group until we educate our public adequately, and spread peace and knowledge among our children, so one day they will be our ambassadors of unity across the globe.

I consider myself an independent. Don’t think going for a candidate based on their party is very wise. Though, from the start of my political life when I was able to understand the parties and how politics work, I do (more often) side with the issues that are important for the Democratic Party. More so, for this election, I’d say I am against the Republican Party than for Democrats. Why? Just look back at the past eight years for your answer. We were lied to, fooled, and taken advantage of by people we never met, who’ll never meet us. They were politicians who were elected by their country, and flatly neglected everyone who could be neglected—within our borders and beyond. And the same people who elected Bush/Cheney had faith enough to elect them twice!

The demographics of our country are changing, even if it is only slightly. The youth are getting educated, and we are on path to change the world and the face of politics for the new generations. Our older generation, loyal to the Republican Party, who grew up either fighting for or against civil rights, is disappearing.

The old man with the Curious George doll, the white men and women voting for McCain just because they cannot let their idea of a white ruled America go, will one day be gone. And once they are, it will be we, the ones who witnessed their mistakes, rising to the occasion. We will make choices out of the search for solutions, and not out of the influence of hate. This election, regardless of the winner, illustrates that America is changing, and within each span of four years, a new class will be sent forth to fix their parents errors, until the day when the world, and not just America, will be on a clearer path toward equality and respect.

I leave it as this: tomorrow we’ll have a winning side. America’s future will be in the balance, as it is every day. But in each day, we control our destiny, and we are the conductors to our dreams. One day things will change, and when we hit disastrous times, we can always depend on hope.

To the readers who will read this in the future, as I am sure the majority of you are, think hard of what the times are like for the world now, and what needs to be changed and how you will correct it.

Until then, if your fear of change influenced your vote for this election, be prepared: you’ll one day be the minority.

I’m Jason Duaine Hahn — a Los Angeles-based writer and photographer with a passion for design, creativity, personal development and the human condition.